Our Results: Testing and Testimonials 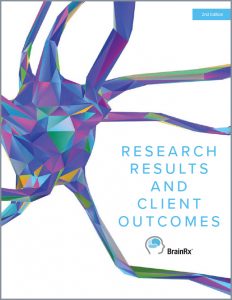 BrainRx Brain Training is based on the training techniques developed in the United States by LearningRx, the parent company of BrainRx. To see the kinds of results being generated at 85 LearningRx brain training centers in the United States, click on the link to download our Client Outcomes and Research Results.

Below is a study of BrainRx results, showing pre- and post-testing results from the Gibson Test of Cognitive Skills. These results show percentile improvements (percentile measures where a person would rank in a hypothetical group of 100 people. If a person ranked in the 25th percentile, it would mean that he or she scored as well or better than 25% of students in the group). These scores are based on 284 BrainRx students completing pre-and-post testing.

Another way of knowing what BrainRx brain training can do is by reading stories and comments of individuals and families who have experience the BrainRx programs. Here’s what BrainRx clients have to say about the impact of our programs in their lives: “I remember three months ago when I was desperately browsing the internet to find any institute that could help my kids improve their grades. I was exhausted and frustrated. I came across your website and found it promising. I have noticed a big difference in the kids. Amer’s teacher applauded him for the big improvement in his work. Mohammed is doing better in math. Regarding my daughter, her attitude has improved 180 degrees. She is more organized, independent, and most importantly math is no longer gibberish to her. Thank you to all the trainers involved in helping my kids excel.” –Mother of three BrainRx students

“I used to go to a lot of tutoring classes, but it was a waste of time for me as I didn’t have any big improvements. Then, a friend of mine introduced me to BrainRx. This training helped me a lot, not only at school but also in my daily life. Now, studying subjects such as Chinese History is no longer a challenge for me because I can memorize more and faster. I also remember phone numbers and passwords faster and I do not often need to take notes in y phone. This brain training is not boring…it is really good and fun!” –14-year-old BrainRx student

“I can concentrate more, I think faster than I used to, and most importantly I remember so much more!” –17-year-old BrainRx student

“My math has gotten better. I have a faster reaction time. My memory is better. My brain warms up faster.” –12-year-old BrainRx student

“My children have been in the program for almost three months. The one-on-one training sessions help to regularly review their progress and tailor the programs to fit their needs. I found that they already showed improvement in weak areas as soon as they finished one third of the program. They seemed to have better working memories, improved problem-solving abilities, more logical thinking and better academic performance. Thank you!”–Mother of two BrainRx students

“I can’t say enough about how happy I am about Thomas’ progress since he joined your program! In only a couple of months, he has significantly improved in many areas, at school and outside of school. He spends much less time when studying, and I am really glad he has gained both in sports performances and in self-confidence.” –Father of a BrainRx student

“It took about six months after I heard of this program to actually take the step and enroll my daughter, a step I will never regret. The homework struggle, the forgetfulness, and distractions all seem to be something from the past. At school, her teacher felt a big shift if her attitude in class. She wants to participate, she has original ideas, and her math level has risen. Last week, her dad could not believe the speed with which she was able to calculate a problem!” –Mother of a BrainRx student “Mohammed has shown a lot of improvement with regard to the following.

Thank you for the help and support you have given him!” –Mother of a BrainRx student

“We have been receiving a lot of positive feedback from my son’s teachers. Not only that, but my son seems happier and takes more initiative.” –Father of a BrainRx student

“Our son was into his teens early this year and showing all signs of being impatient, angry, restless and suffering from attention disorder. We could not make him sit in front of the books for more than 15 minutes. But ever since he joined BrainRx, we have seen a remarkable change, not only in his concentration levels but also in his attitude. He has become more independent and trusts in his own ability to learn and understand new concepts.” –Mother of a BrainRx student

“My son has completed a month of training and I am amazed, myself, by his improvement. His math computation speed has drastically improved. He watches less T.V. now and actually asks me for more books to read.”–Parents of a BrainRx student

“I have 2 daughters, Nikita (16) and Tanishqa (10). Both the girls enjoy going for their training as their trainers seem to make it fun. The most obvious change I have noticed in Nikita is her improved memory and her improved coordination. The training has made her more confident. Tanishqa was very dependent on me for many things like getting ready for school, doing her homework and projects, etc. After her training, she has become much more independent, plans her day well and does her homework on her own. She says she can multi-task better and solve exercises in class faster.” — Mother of two BrainRx students

“Srujan has a learning disability and it had been difficult for him to learn new things , focus on studies and any activity which requires multitasking. He had trouble with writing and I always had to read back to him to make him understand his lessons. But after completing few sessions, I noticed concrete improvements in him. He started writing in school without coaxing and also reads much faster and comprehends what he is reading at the same go. Even his teachers have noticed the improvements in him.” –Mother of a BrainRx student

“Since his training we have observed a tremendous transformation in his performance, not only as a badminton player, but also academically. Today he needs much less time to grasp his subject matter & has achieved an overall percentage of growth in academics too.: –Mother of a BrainRx student

Want to open a BrainRx Center in your city? Get licensing information here. BrainRx Brain Training programs are only available outside of the United States. If you are looking for help and you live in the United States, visit www.learningrx.com. LearningRx is the parent company of BrainRx.

Want to change lives for a living?

Open a BrainRx Center in your Community.